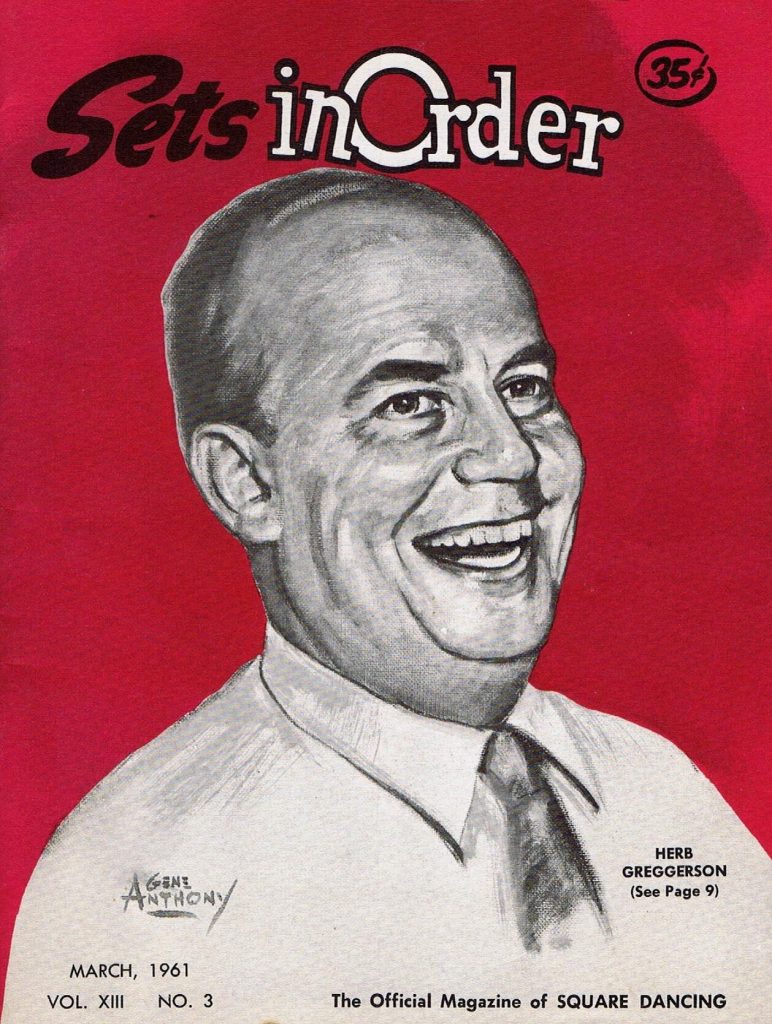 (Note: We cannot locate the original Gene Anthony portrait of Greggerson; it is not at the Lloyd Shaw Foundation Dance Center.)

Herb Greggerson
The thermometer in Studio A at Capitol Records showed that the temperature was normal in the large room but beads of perspiration rolled from the face of the big Texan standing behind the microphone. Shoes off, shirt collar open, a concerned look upon his face; this was indeed a rare view of Herb Greggerson.

Now it was the end of the twelfth “take” and finally the red warning light went out and the voice came in over the control room speaker, “That was a good one. Let’s wrap it up.”

This happened more than eight years ago and was the first time in all of the years we had known him that we had ever seen Herb anything but relaxed. As he went over to the side of the studio to replace the high-topped Texas boots he had removed somewhere between the sixth and seventh takes, the smile returned to his face. “Man, that was sure something!” he explained simply. “Herdin’ a bunch of longhorns would be child’s play after one of these record making sessions.”

Herb is and always has been the rugged outdoor type. When he first got acquainted he was best known in El Paso as the square dancing mailman. Each day folks would see him carrying his route. Each evening people from all over would come to his museum-like barn to dance.

One of the most colorful of all callers, Herb was a pioneer among traveling exponents of the activity. His Blue Bonnet set of beautifully costumed dancers caught the eye of many who attended the New York World’s Fair several years before World War II. To many people coming from every state and from quite a number of foreign lands this was an enlightening experience. Dwelling in the belief that square dancing was a rough and ungentlemanly bit of recreation, they seemed delighted to discover instead a colorful and fascinating activity.

Herb always struck us as being one of those individuals who learned to square dance before he ever learned to walk. His Texas-style dancing and calling are smooth, easy-going, comfortable.

Round dancing for the Greggersons was always an important part of square dancing. The secret for them was not so much in learning great quantities of new routines as it was in mastering the simple grace and flow of a few traditional American couple dances. Nothing in round dancing ever delighted us quite so much as watching Herb and Pauline float thru a Varsouvianna or tackle some of the Texas Schottisches. This was dancing!

His collection of square dance calls and patter under the title of Herb’s Blue Bonnet Calls was published just after the War [editor’s note: actually in 1939] and became the guide book for so many hundreds of young callers and dancers coming into the new square dance program. For years Herb ran an institute camp for leaders and dancers in Ruidoso, New Mexico, and for quite a while he spent a good portion of his time touring across the land conducting classes and institutes.

Many folks have written, asking us whatever happened to Herb. Did he drop out of square dancing? Is he well? Just what is he doing now?

Not being too sure ourselves we took a chance the other day and talked to Herb and Pauline on the telephone. They both sounded wonderful.

Herb calls for “a little ole country square dance club” every second and fourth Saturday and manages to keep square dancing on the program for people at their guest ranch.

“What about traveling?” we asked him.

“Well, I haven’t been traveling for some time” was his reply, “but I expect to be traveling again at a later date.”

The prospect that some of the newcomers to square dancing may one day have the opportunity to get to know and dance to the Greggersons is indeed encouraging. Whatever gift it is that Herb possesses can and should remain a part of this American activity.

To Herb Greggerson then, our cover man for March, we proudly dedicate this issue.