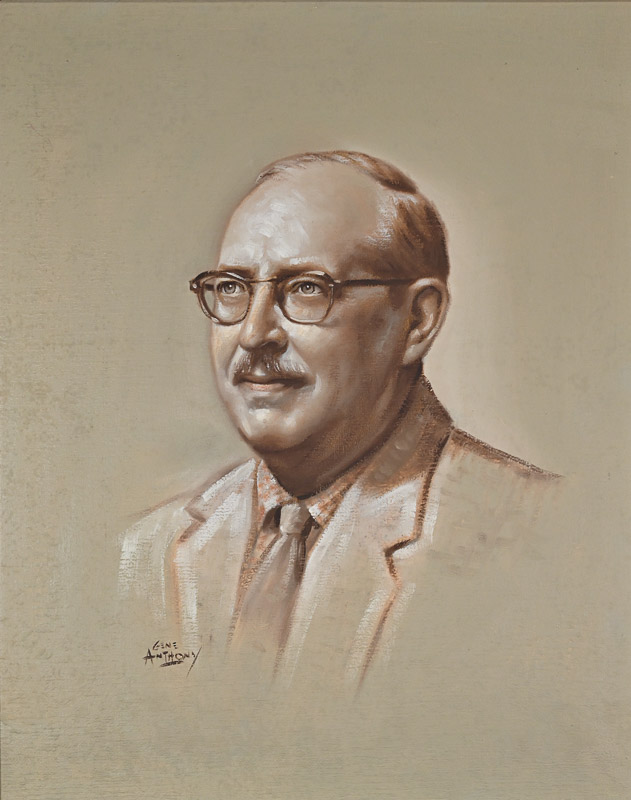 Ralph Page
The crowd was so great that no suitable hall could be found to hold all of the people. So here they were, more than 4,000 dancers, gathered on the surface of the huge outdoor stadium taking part in the square dancing.

On the raised platform at one end of the field was the caller, a short, rather stocky individual fresh from New England. The dancers, now in long contra lines stretching far across the field, were Japanese. They understood little or no English while the caller, knowing only one or two words of Japanese, was directing them all by the use of hand motions.

At best, handling a group of this size is no simple task, but under these rather unusual circumstances this was indeed a job for one with great experience and understanding. For Ralph Page, however, this event which took place in Tokyo a few years ago, was just one more colorful highlight in a life filled with unusual square dance experiences.

Ralph started his calling career on December 6, 1930. He looks back on that night and remembers with a bit of wry humor that this first attempt was no calm and gradual introduction into the calling field. With less than an hour’s warning he had been roped into calling the entire evening’s program.

Calling the dances, however, turned out to be just part of the normal evolution for our New Hampshire friend. His uncle had been quite a well known prompter in his day. His father was outstanding as a fiddler and his grandfather Isaac Dunn had been a wonderful dancer and a ballad singer of wide repute. One of his grandfather’s favorite dances was called Petronella and it’s been said by the old timers in and around Keene, New Hampshire, that when the music stopped for that particular dance Ike Dunn was always three feet off the floor!

And so it was that Ralph moved into calling naturally, having learned to dance as a youngster in the kitchen junkets that are a normal part of New England living.

Back in the early 1930s a lady by the name of Beth Tolman who was then assistant editor of the Yankee Magazine suggested that Ralph write a series of monthly articles on square dancing in the New England area for the magazine.

The success of these articles prompted the owner of The Countryman Press, to sign up both Miss Tolman and Ralph for a book based on the articles. In 1937 the first of five printings of The Country Dance Book came off the press.

This book more than any other volume we’ve run across paints a most complete, human and humorous picture of early American square dancing as it affected folks in the New England states.

“New England,” Ralph wrote in the book, “is one of the oldest corners of our country. It is compact, integrated and, comparatively speaking, it loves its traditions. Here is a coast settlement that has experienced a constant injection of lusty immigrants fresh from dancing on their own village greens. If ever a people were given a chance to be born and bred in the purple of their dances, the Yanks were those people. As babies they were often lulled to rest to the measures of Speed the Plow or Smash the Window, and often they were carried to an assembly or junket where they were cradled in communal beds made from benches, seat to seat arrangement. Way before they were out of their swaddling clouts, then, these kids must have understood what was what on the dance floor. Then at an early age they began doing the dances themselves; later the stern dancing masters polished their steps and taught them how to ‘make manners’ on the dance floor. What a foundation!”

Ralph’s knowledge of background went past our Civil War period of one hundred years ago – a period in which this type of dancing was in full swing – back even to the first early days in America’s history.

“During the Revolutionary years everybody danced, including the minister, who found his place in the community via an Ordination Ball rather than by any such dour celebrations as are common today. As a minister, he was judged less by his pulpit pratings than by his ability to . . . handle a difficult figure. The officers in both the English troops and the Colonials were so crazy about dancing that some say, if you listen hard enough, the hills of New England will give forth a faint echo of Lord Howe’s Revels, or perhaps let go a few strains of Washington’s favorite, Sir Roger de Coverly.”

To say that Ralph is devoted to his dancing is indeed a major under­statement. As a full time professional caller and teacher since 1938 he has kept a regular home program of dancing going steadily for the past 25 years.

One of our fond memories is of several days spent with the Page family in Keene, New Hampshire, a few years ago. We just followed along as Ralph ’tended to his classes in the local school and joined in while he conducted his large open dance at the Boston Y. We remember being initiated into the proper New Hampshire method of eating punkin (never pumpkin) pie and being given the facts of life concerning true New England boiled dinners.

Indeed Ralph Page is one of the living legends of this ever changing square dance world. Though we may not all get a chance to “form on” for one of his contras or kick up our heels in true Yankee fashion for one of his quadrilles, perhaps we can at least get an occasional opportunity to sit down with a copy of Northern Junket, a homespun square dance magazine Ralph has edited for thousands of years, and get a genuine chuckle from this almanac of American dancing folklore.

To Ralph Page, whose likeness fills our front cover this month, we pay special tribute and to him we dedicate this issue of Sets in Order.

This was typically Ralph’s closing dance in an evening program.