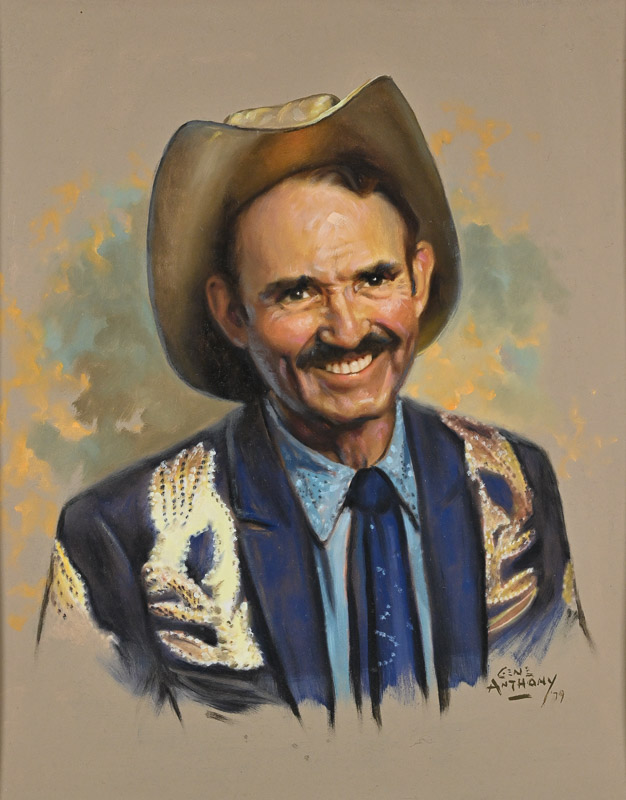 Les Gotcher
Few contemporary callers have left their mark so indelibly engraved in the shaping of today’s square dance picture than the latest caller to be inducted into the Hall of Fame. Les Gotcher, who today lives in Zephyrhills, Florida, where he presently calls for three beginner classes, had his baptism in square dance calling in 1916 at the tender age of eleven, for which he received the princely sum of twenty-five cents. As one of the nation’s most colorful callers, Les moved to Hollywood from South Central Texas and became associated with the motion picture industry, calling for a number of Hollywood films including Night Train to Memphis with Roy Acuff in 1939, followed closely by Square Dance Jubilee, then two of the John Wayne classics, and Copper Canyon, House by the River, East Side West Side, The Duchess of Idaho, and others. In addition, Les conducted regular club dances at the famed Beverly Hills Hotel which attracted such movie greats as Andy Devine, Ronald Colman, Lloyd Nolan and Cesar Romero.

One of the first to visualize the possibilities of the many challenges of square dancing, Les “surprised” the square dance world by combining the basics or “hashing the breaks,” a forerunner of much of the sight calling and position dancing of today. His innovations soon received nationwide attention and Les became one of the foremost traveling callers in North America. Few callers today have a record that can surpass Gotcher’s miles-traveled-per-year in doing one-night stands, callers’ clinics and workshops. As originator and editor of an internationally circulated magazine, Squares ’n Rounds, and as author of many texts on calling, including The American Square Dance, Callers’ and Teachers’ Manual, Hashin’ the Breaks and others, Les became a model for countless young callers coming into the activity. Among the first to record, Les’ records on Capitol and MacGregor labels are still models of excellence. His own Black Mountain label poured many dozens of patter call discs into the activity during the 1950s and 60s.

Now retired and devoting his time to fishing and teaching, Les and his wife, Winnie, who recently celebrated their 53rd wedding anniversary, look back on many happy years devoted to square dancing. It is because of his tireless energies and his many contributions to this activity that we join with square dancers around the world in saluting Les Gotcher, an honored member of the Square Dance Hall of Fame.