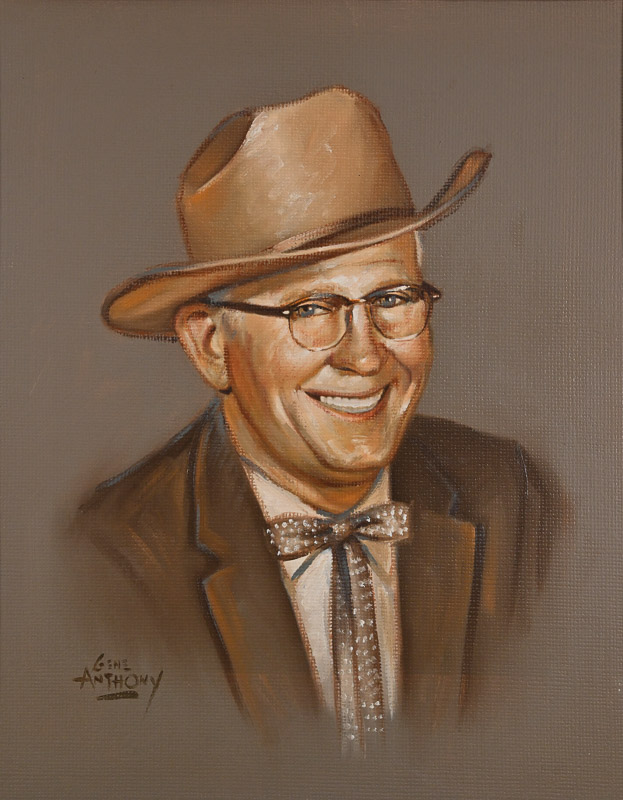 Raymond Smith
This month we dig into the diary and come up with one of the most colorful of all contemporary square dance personalities, Raymond Smith. I first met Ray back in Pappy Shaw’s Colorado Springs institute in the summer of 1947. Six foot six and all Texan, Ray seemed to us to be all that a square dance caller should be. I guess we were all mighty impressed with Raymond for when it came to the end of the week and the entire class (made up of callers and teachers) had to select one of its members to represent it at the big open dance in the park – Raymond was our choice.

Big Ray did his first dancing in 1939, and started his calling for P.E. classes in the Boude Storey Junior High School in Dallas where he has been a teacher of Texas History for 26 years. One of the first callers to hit the traveling circuit Ray tells, with a bit of understandable embarrassment, of the time he had his whole family with him on tour. “We were in the Midwest and I had stopped for gas,” Ray explains. “Mildred (Ray’s taw) and Sherry were asleep in the back seat and Diane was riding up front with me. We stopped for gas and while I made a visit to the men’s room Mildred and Sherry woke up and made a trip to the ladies’ room – but I didn’t know they had gone. When I returned I paid for the gas, got back in the car and started on my way. After about two blocks Diane looked rather questioningly at me and asked, “Daddy, aren’t you going to wait for Mother and Sherry?’ You can bet they haven’t let me live it down.”

Ray has served on the faculty of many camps and has run several of his own. When the reputedly sedate English Country Dance Society wanted an instructor to bring in the true flavor of the Western Cowboy style of square dancing their very discriminating choice was the Smith man.

Raymond says the biggest turning point in his square dancing life was when he attended the Shaw Institutes. “We have many fine callers now,” says Ray, “but I am thinking how much better they could have been if they had had the opportunity to listen to those morning lectures of Pappy’s. He just put things into your heart that others don’t seem to have today.’” Ray always has a beginners’ class going for the Dallas Parks Department. The smallest class was 15 squares, the largest 60 squares.

Ray’s two comments about today’s dancers, “I still believe that a smooth dancer will stay in the activity the longest,” and, ”I think that you should be able to see a good dancer – not hear him.”

It’s a pleasure, Raymond Smith, to single you out and dedicate this issue of Sets in Order and its special cover to you.